SagaBorn Battles is a card based miniature game of player vs player skirmishing.

The lands of Atheles have long been in a dark age, though now magic has begun to return. Adventurers, tomb raiders, and grave robbers search the lands for ancient relics of magic.

SagaBorn Battles is a card based skirmish game that uses miniatures you already own, or you can browse the list of our recommended minis. Terrain can be 2d or 3d printed and is based on a 1 inch hex.

Build an adventuring group, delve into the dungeon or ruins, and battle over the lost relics of the past.

House Ka’Dal is led by the Orovari, or dark elves, of the North. They are gathering relics and magic items to outfit their army as they invade the southern kingdoms. Their goal is to ressurect they sacred god Kaldrath and force the lands of Atheles into order.

From the outside, the Wanderers is just a guild of adventurers. But their true goal is to bring power to the peoples of Atheles and free them of the shackles of the past. They hope the artifacts their teas collect allow for a brighter future of Atheles. 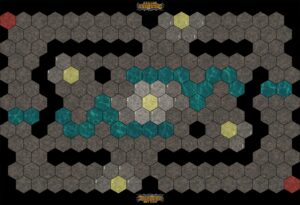 Plus, no map or mat is necessary. You can play with a flat surface and a ruler.

These dice are used for the SagaBorn Battles Miniatures Game. This is for a set of four dice, with t..

SagaBorn Battles is a card based miniature game of player vs player skirmishing. The lands of A..

A coin from the old Kingdom of Aradan. This can be used as a game token for any SagaBorn game.This i..