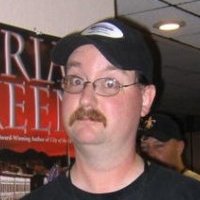 Brian Cooksey is an RPG editor and designer who has been roleplaying since 1982. He has worked with Accessible Games and the Sagaborn system among others. He is one of the hosts of the Play On Target podcast and is the former chairman of Hypericon.

Shonn has been a sci-fi and fantasy fan since childhood and began playing FRPGs around 1980. He has been writing campaigns and DMing for over 30 years. He wrote adventures and developed game materials, magic items, ships and monsters for TSR set in the Forgotten Realms, Dark Sun, Spelljammer, and Ravenloft settings, and is published […]

Dane Clark Collins is a writer of fantasy, science fiction, and the occasional nonfiction currently living in the Greater Philadelphia area. He is a lifelong student of philosophy, physics, and all manner of strange and esoteric nonsense, and brings all of this background into his writing. Dane has been a musician since he was given […]

Michael Bielaczyc has been making art his whole life. He has been selling and showing work since 1995, when he self published his own comic book. Going back to college at 23, he decided that art was going to be his main focus in life. In 2001, he started an art company, Aradani Studios, with […]