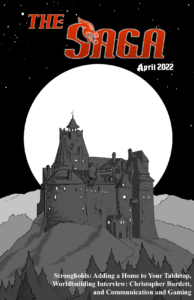 Originally Featured in The Saga April 2022

Want to be part of a good roleplaying game group? Communicate.

It’s hard to get a group of geeks on board with almost anything. Even when playing games, we can easily end up in fights over…well, pretty much everything. In roleplaying this can take the form of in game character fights, in game out of character fights, out of session fights, fights over what someone said eight games ago (if the group holds together that long anyway) and fights about whether those snacks were for the whole group. Humans being humans we’re not going to eliminate all the friction that leads to arguments, it’s impossible. We can ease a lot of it, largely by setting healthy expectations. Here are some ideas for doing so before the first adventure begins. These are written from the perspective of someone running the game or campaign, though will likely be shared by a few people, if not the whole group. Sometimes these are even done out of order!

Now you approach people to play in the game. It’s important that you go through what you came up with during the pre-campaign work. You want to be as open as possible about the themes, type of game, and expectations as you can be without spoiling any major surprises for later. Not only should you let everyone know this information, but you also really need everyone’s agreement to play the game you’re planning. This is where you would hopefully stop the mess of “my character WOULD stab the other player character in the back and steal his gold” sorts of things during the game. Unless that’s the game you WANT to run, and everyone has agreed to it.

This has become a shorthand term to describe getting everyone together to finish character creation. Some groups go through the entire process together, which might even be required depending on the game you’re running. This might also include things like: How the characters know each other, any history that the characters would know that the players don’t, an explanation of game mechanics if needed, and scheduling the first playing session. This is also a great time to reinforce the themes, and any other information you want to go through. A discussion regarding how to deal with awkward or uncomfortable situations whether in or out of game can help here. At this point it often makes sense to get commitments from everyone regarding any rules or guidelines that have been adopted.