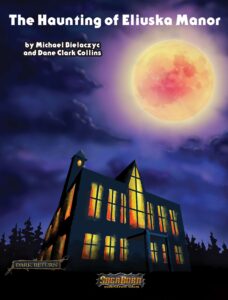 Get the SagaBorn Version
Get the 5E Version

Can you survive the horrors of the mysterious Eliuska Manor?

The haunted house: a setting that has fascinated us since we first moved from the open wilds into homes contained in stone. Take your adventurers into a terrifying mansion filled with all the things we love about horror movies, haunted houses, and spooky adventures! The adventurers have been asked to investigate a lord’s manor after another team of heroes went in and never returned. They will follow the clues deep into the bowels of the giant manor hoping to unlock its gruesome secrets.

Strange things have been seen on the grounds of Eliuska Manor, and the Wanderers have sent the adventurers to investigate, and, if necessary, eliminate any threats to Kowal and its citizens.

Gregor Eliuska (El – eww – ska) is a Kowal merchant who has devoted years of study to the dark arts in search of power. Now, he has gone too far.

He amassed a fortune from corrupt dealings and used it to convert his old hunting manor into a sprawling mansion. Here, he has studied forbidden books, cast cursed spells, and summoned demons. When he summoned an illarth, a powerful demon from the Navirim, he became its slave. The illarth feeds on sentient minds, and it has used Gregor, the mansion, and others to lure unsuspecting victims to its grasp. The mansion adventure has many levels, each leading closer to the bottom, into the alien lair of the illarth.

The grounds are haunted by a fear demon, preventing any escape once the adventurers enter the mansion. Will the adventurers find a way to neutralize the illarth or will they become its next meal?

VTT and hi res Maps for this adventure: https://www.drivethrurpg.com/product/318359/Map–Eluiska-Manor-a-Haunted-House